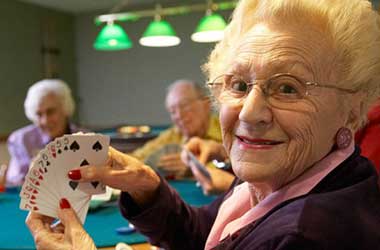 In the United Kingdom, it has been discovered that seniors are now the primary people group that prefer playing online poker. Furthermore, it appears as though Londoners believe that they are better than average, according to a survey done by Grosvenor Casinos. The survey was undertaken by the betting site in order to identify some of the poker trends within the UK. A total of 2,000 players from around the UK took the survey.

Not only does the Grosvenor platform provide one of the largest live casino selections in the UK, but it plays host to a poker tour that has been in operation since 2007. This poker tour has actually been the starting point for many of the country’s best poker players. Famous players that have participated in this tournament include Sam Trickett and Chris Moorman.

The Grosvenor group used its GUKPT tournament as a means to complete the survey research, and it was through this that a selection of appealing facts were revealed. Of the Londoners who took the survey, 93% of them spoke of being average or above average poker players. That contrasts quite heavily with the 55% of West Midlands players who gave themselves an average or below average score. Furthermore, according to the survey, 93% of small stakes players also believe that they are average at poker.

These figures weren’t the most startling revelations though. In fact, that came from the result showing that more than two-thirds of over players over 55 prefer gaming online. Additionally, 75% of gamers in the age range of 55 to 64 agreed that they have a preference for playing online instead of in an actual casino establishment. Naturally, the 18-24 category of people playing online was predictably high, standing at 86%. However, the increase in senior members playing poker online also denotes a change in attitudes.

Back when poker first became available to play online, it was clearly a younger person’s gaming preference. As times have evolved though, older players seem to be taking the online poker market as their own, while younger gamblers are stepping out into land-based casinos. These figures are in stark co-ordination with the UK Gambling Commission’s findings too. For the second consecutive year, online gambling has brought in far more profit than any other.

The gross gambling yield (GGY) across all gambling sectors between April 2016 and March 2017 stood at £13.7 billion. And from that total amount, remote gambling accounted for £4.7 billion. This makes it the single largest contributor for that time period and is also 10.1% more than the previous year. It seems clear that the rise in the popularity of online poker from older players has somewhat contributed towards this rapid growth.