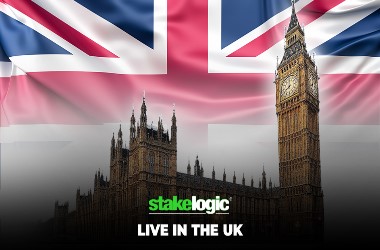 Stakelogic will enter into the United Kingdom’s gaming market for the first time, having secured itself a gambling licence from the Gambling Commission. The regulatory body of the country gave the developer the green light to move forward with introducing its games to various online casinos that serve the country. This means that a wide range of high-quality slots will find themselves being offered up through various platforms.

Due to the launch of Stakelogic’s products in the UK, players will soon have the ability to access popular titles from the provider, including Book of Adventure, Encharmed and many more. There’s even a new Christmas-themed slot to get you in the festive spirit, called Mystical Santa: MegaWays. This marks the second of the developer’s games to have been imbued with the MegaWays function. What’s more, as a sort of celebration of Stakelogic’s upcoming UK launch, the company has chosen to create online versions of some of its highly popular land-based casino games. These include Eureka Einstein Moments and Lucky Mushrooms.

To combine with this UK launch, Stakelogic has also signed in to a licensing agreement with Big Time Gaming (BTG). This enables the developer to licence the innovative MegaWays mechanic, which was created by BTG, and the first product from that series was launched in recent times, too – Black Gold: MegaWays.

It seems as though Stakelogic isn’t holding back from getting involved with the gambling market of the UK straight away, either. It has signed into a number of supply agreements with large operators providing their content to the country, proving that it has the intent to swiftly solidify its status in the UK.

It’s quite understandable to believe that the CEO of Stakelogic would be thrilled to have expanded into another market. And that’s exactly what Stephan van den Oetelaar said while commenting on the milestone. He continued on by saying that the brand has created online versions of many land-based slots from Reflex Gaming, and he believes those titles will doubtless prove to be popular with any avid fans of online slots.

He would also touch upon the agreement that Stakelogic has signed with BTG, saying that this is sure to be a big hit with UK players as well, considering how well it has done with players in other jurisdictions around the world.

With the move into the UK market, Mr Oetelaar spoke of tripling the revenue of Stakelogic’s clients once more in 2020. And the developer isn’t finishing with the UK market, as it looks to continue expanding into additional regulated territories. Considering that it was only a few weeks ago that the brand managed to secure itself a Class II gaming licence to operate legally in Romania, this is quite the believable course of action for Stakelogic. Only time will tell where the developer’s games will end up being provided next.