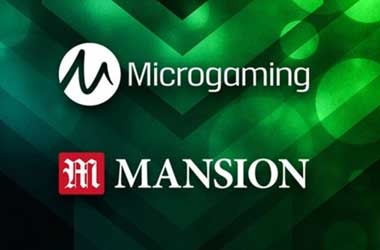 Microgaming is already one of the biggest online software developers, but in a bid to further expand its online casino network, the company has signed into a deal with the popular Mansion operator. In this deal, the full range of Microgaming’s games will be present at all leading brands within the Mansion portfolio.

Of course, this deal isn’t only beneficial for Microgaming to expand its own territory, but also for Mansion to branch out. With a larger game collection at its flagship site Casino.com, as well as several others, the platforms are likely to draw in more customers while maintaining the interest of current players. Alongside the standard online slots, the sites have also taken the opportunity to include Microgaming’s popular progressive jackpot titles as well, such as Mega Moolah. This game has gone on to produce multiple millionaires in its many years of operation.

With regard to the new association between the two companies, Microgaming’s CEO, Andrew Clucas said that the developer is highly excited to be welcoming Mansion into its constantly growing base of clients. He said that Mansion is a company that is recognised for always striving to provide its own customers with “superior quality products”, so as to ensure that they all have the very best gaming experience possible.

To back up the statement from Microgaming, the Director of Gaming for Mansion, Andrew Manduca placed emphasis on the developer having the most innovative and exciting selection of online casino titles. He went on to say that the “engaging content” is certain to help Mansion with furthering its own expansion and finished by expressing his sincere delight at partnering with Microgaming.

The Mansion brand has been operating for over 15 years now, and in those years, it has established itself as one of the leading online casino providers. It was in 2018 that the company received the Most Responsible Online Gambling Operator award from the Capital Finance International Awards. In the same year, Mansion would claim the Online Casino Operator of the Year award from the International Gaming Awards – yet another accolade to add to its ever-expanding list of achievements.

Microgaming, on the other hand, has been creating and providing content for casinos since 1994. It has often set the benchmark for other companies and continues to evolve year after year, releasing numerous games throughout, from slots through to live dealer titles. Operating out of the Isle of Man, the company has received its own fair share of awards over the years, whilst remaining on-the-ball with the latest technology and innovation.