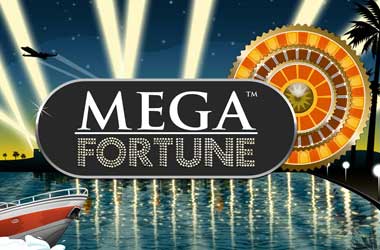 Progressive jackpot slots are one of those games that some people play if they’re feeling extra lucky and want to try and scoop a huge win. And one of the most popular progressive games that gamers take to for doing this is Netent’s Mega Fortune. Now, if some of you were thinking that progressives probably hardly ever pay out, try telling the latest big winner that.

One lucky gamer from the United Kingdom was playing the online slot recently and managed to hit the massive jackpot pay-out of £3 million (€3.3 million). Granted, there have been larger pay-outs from online progressives before, but we know we’d be singing and dancing to the tune of £3 million if we’d won it.

The win took place while the player was placing bets of 50p per spin on the game at the Gate 777 online casino. This platform, which is owned by the White Hat Gaming brand, offers the Netent progressive alongside multiple others from the developer. Three bonus symbols would appear on the first three reels, triggering the Bonus Wheel round of Mega Fortune. The player then managed to advance all the way through the sections of the wheel to reach the centre and trigger the £3 million Mega Jackpot win.

Speaking on the huge win, Bryan Upton, the Director of Games at Netent said that he and the rest of Netent are thrilled over the creation of “another instant multi-millionaire”. He went on to comment on the fact that Mega Fortune and its sibling progressives have generated a huge overall total jackpot pay-out of over €61 million.

Netent Brings the Experience and Entertainment

Mega Fortune is one of the older progressive jackpot games that Netent has released, first coming to the online world in 2009. Over its decade of operation, it has provided many players with huge, life-changing pay-outs, alongside other progressives from the brand. These include Mega Fortune Dreams, Arabian Nights and Hall of Gods.

Continuing on with his remarks over the huge win, Mr. Upton said that the developer is aware of the love that players have for progressive jackpots from Netent, which provide them with “the chance of hitting it real big”. That’s why, he said, that Netent has taken steps to ensure that even more exciting and entertaining jackpot games are being added to the collection.

It didn’t take long for the Chief Executive Officer for Gate 777 online casino, Ronna Shilon to comment either. She sent her congratulations along to the player on behalf of herself and the entire Gate 777 team. She finished off by saying that the team there work hard to ensure that players get the best slot and table games in the industry, before crossing her fingers for more big winners to be players at her platform.

While £3 million is still an amazing reward for playing an online slot, earlier on in the year, a 65-year-old lady scored the biggest jackpot of 2019 so far. While playing Mega Fortune Dreams at the Betsson Casino, she managed to hit the progressive jackpot and take home €4,333,667.97 altogether.