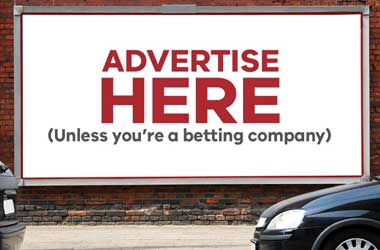 The once very liberal gambling scene in the United Kingdom is having its reins drawn in in several areas, it seems. While the Gambling Commission of the country looks to take control of online casinos and sportsbooks that aren’t protecting their customers, the Remote Gambling Association (RGA) is focusing on other areas.

This week, the RGA went ahead with certain changes, meaning that betting and casino gambling advertisements cannot be shown while sporting events are televised. This new deal will seemingly affect online sports betting platforms more so than casinos. However, when you look at many UK platforms, they feature both a casino and sportsbook at the very least. So, it’s quite likely that the effects of this move will be felt within the entire UK gambling industry.

While most changes in the UK’s gambling scene in recent months have been down to the UK Gambling Commission, this change rests totally in the hands of the RGA. Advertisements for online gambling sites will still remain active in the country, they just won’t be able to be shown while sports events are in-play and televised. Up until now, during commercial breaks of events, it was common to see gambling sites being promoted and advertised.

Why Such a Change?

It’s as though the RGA is echoing what the UKGC has been saying for the past several months – the gambling industry in the UK has been spiralling out of control. A rising number of British gamblers have taken to betting online, although many of them are influenced by the mid-match advertisements shown during sports events. These adverts often promote bonus rewards and great betting odds, which has had an effect on how many people visit and wager at sites.

Yet, the changes might not end with the television commercials. Speculation has been cast over gambling operators being banned from sponsoring football teams. This would see their logos be removed from football shirts, which could certainly have a grand impact on online casinos operating in the United Kingdom. While nothing has been set in stone with regards to this, it’s quite a potential threat to the industry that should be considered by operators.

Backlash has already been felt by the government over its decision to reduce the maximum bets available on fixed odds betting terminals (FOBTs). First, operators of gambling establishments were angered by the fact that they would be losing out on revenue. This led to the government pushing the date for the changes back towards the end of 2019. Anti-gambling protestors then complained about the push-back of this date, causing the government and the Gambling Commission more grief.

Time will tell how the banning of television gambling advertisements during sporting events will affect and be taken by gambling companies. Yet, in the long-run, it may serve the British public in a better way. The number of problem gamblers in the country has soared in the past few years, even spreading to minors, with more underage people engaging in gambling now than ever before.