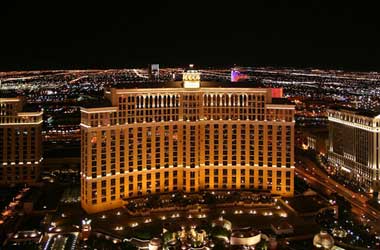 The suspect of a casino robbery attempt was shot and killed after a shootout with police on the Las Vegas Strip on Saturday, authorities have confirmed. While the man is yet to be identified, the armed man had reportedly entered the Bellagio casino and demanded that the cash was handed over from the poker cage. Following this, he fled the scene of the crime from the building’s northern entrance.

It seems as though the plan for this armed robbery wasn’t thought out well enough though, as police were already in the area to investigate the case of a missing child. Rapid response from the police force saw them catch up with the suspected robber in the valet lot. It was there that they found him trying to car jack one of the vehicles within.

Police say that the suspect then open fired on officers, resulting in a shootout in the valet lot.

Speaking of the incident, Captain Nichole Splinter from the Las Vegas Metropolitan Police Department reported on the events. The suspect reportedly fired at least a single shot at the police force, before he was shot by an officer, according to Splinter’s briefing.

“The officer had his bulletproof vest on”, Splinter continued, noting that this was probably what saved his life, as it seems like the bullet struck the front of his chest. Afterwards, the suspected criminal and the officer were both taken to a nearby hospital, with the thief initially determined to be in a critical condition.

The suspect did not survive, with his death being confirmed by police spokesman, Officer Aden Ocampo Gomez. The officer, on the other hand, was treated for minor injuries and released from the hospital.

Yet, it seems as though nobody within the casino was even aware that the robbery was taking place. A video surfaced from a user on Twitter known as Andrew Badecker, taken moments after the incident took place. In the video, an officer attempts to question all potential witnesses within, but gamblers aren’t able to provide him with any information.

Badecker clearly responds to the police officer that “no one noticed” the robbery, in the video, as statements are taken from avid gamblers.

Another Twitter user with the username @Gamblindude, posted an image of a Las Vegas police officer cordoning off the poker cage area of the casino with tape.

The identities of the suspected thief or the officer who fired the fatal shot have not been released. Neither has a figure of how much money the robber got away from the land-based casino with, although the poker cage was kept out of bounds until further queries could be asked and statements taken. It is at the poker cage where players go to exchange their chips for cash.