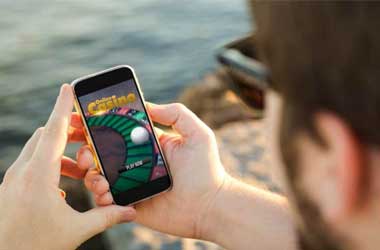 The number of casino gameplayers who are accessing slots and such through their mobile handsets are at a stronger risk of addiction than ever before. Recent figures from industry research show that an upsurge in mobile gamers within the United Kingdom has taken place. Mobile casinos make it possible for players to access slots, table games, poker and much more from any location that they have an internet connection. The figures show that there has been a 10% rise in mobile gaming in the year of 2016 compared with 2015.

Furthermore, 18% of adults in the UK live in households with mobile phones being the only access to the internet. This means that many people utilise such as their only means of surfing the net. Therefore, the mobile gambling participation rates are expected to soar even higher.

Mobile gaming is something that many casinos were swift on the uptake of, thanks to the strong reaction to it from gamers around the world. Many casino operators now think of the mobile world first before desktop players. Naturally, mobile-using gamers are bound to respond to such, and casinos also create mobile-specific promotions to entice users as well.

The Growing Level of Risk

With the introduction of the HTML5 technology, enabling developers to craft their games with stronger quality on both desktop and mobile devices, web-based gameplay has become all the rage. Prior to this, it was more common for gamers to have to download casino software to their desktop. In the mobile world, this meant downloading a mobile app to a device. However, it’s now much more common to see casinos now providing their sites and games via a web browser. This has also ensured that gamers have larger choices when it comes to games too.

Naturally, with such ease of access and the lack of having to download anything at all, mobile gamers have seen this as a wonderful revolution. Therefore, it’s only normal for figures relating to mobile gaming to have increased. However, it is this increase that many companies have warned against. Several government agencies and charities suggest that being able to constantly access mobile games has also led to an increase in the country’s problem gambler numbers.

The National Problem Gambling Clinic (NPGC) has uncovered figures that have been quite overwhelming relating to mobile gamers. A total of 63% of patients in 2016-2017 reported having problems with mobile gambling. This was up from a much lower number of 24% back in 2012-2013. The company blamed this rise on the fact that gamers can access titles from any location and at any time. Problem gamblers may find it harder to abandon a game that is available all the time on such a device, as opposed to a desktop site.

On the other hand, though, the Remote Gambling Association (RGA) has put this rise in figures down to the fact that more people are reliant on mobile phones today. Therefore, it says, an increase in the number of problem gamblers in the mobile sector is simply to be expected. Despite this, there have still been requests for a stronger focus on mobile platforms verifying if their customers can afford to wager at their sites.