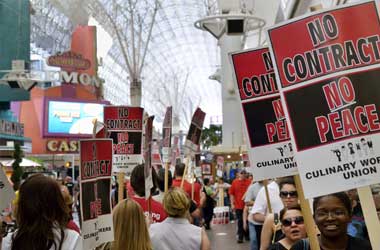 At the end of this month, the contracts of about 50,000 casino employees in Las Vegas are set to expire. The union that represents these people made the announcement on Wednesday that workers are in the process of voting on whether or not a strike should take place – no doubt a step that has the potential to completely devastate the casino city.

The vote on striking is set to take place on May 22 by the collective group known as The Culinary Union, and this will take place at a university location near to the Strip. Should the majority of people vote yes, then the union’s negotiators would be able to move for striking at any moment from June 1. The union’s secretary-treasurer, Geoconda Arguello-Kline spoke about the vote and potential strike that could follow:

She said that on May 22, “thousands of union members will show casino employers that workers are going to fight for security…”, before proceeding on to state that they will not be left behind while companies make record-breaking profits and the benefit of “windfall tax breaks”.

Should the strike actually end up taking place, this would leave a total of 34 casino-hotels that make up part of the Las Vegas Strip without staff – ranging from kitchen employees to housekeepers and food and drinks servers, all of whom are very much a key part of the running and operation of a land-based casino.

Why Is There a Potential Need for a Strike?

With the current workers from the casinos having contracts that end at midnight on May 31, the negotiations for them to receive new contracts started in February of this year. Speaking at this time, Arguello-Kline said that the union group intended to enter into negotiations with the various companies in order to protect the benefits that employees already have, whilst increasing wages and protecting their jobs against the increase of modern technology being utilised inside hotel-casinos.

Furthermore, The Culinary Union has also requested that casino operators provide all housekeepers with something known as a “panic button”. This would be usable if such an employee finds themselves in a potentially threatening position – something that the union thought would be an increase in strength against sexual harassment.

Over 50% of the casinos that would find themselves affected by the potential strike are owned by well-known brands, Caesars Entertainment and MGM Resorts International. The latter of these made a statement on Wednesday about the contract negotiations, saying that it has always been good partners with the Culinary and Bartenders Unions. However, the operator went on to say that it feels confident a solution will be reached.

Richard Broome, who works as the executive Vice President of Communications and Government Relations as part of the Caesars brand also stated his confidence in being able to reach a decent settlement. Both of these large brands said that they had chosen to work alongside the union in order to provide the aforementioned panic buttons to housekeepers at all of their casino-hotels.

The last strike to take place in Las Vegas came in 2002. At this time, a huge majority of workers opted for a strike, resulting in about 25,000 employees choosing to participate in such. However, a deal did come into place before the strike took place.