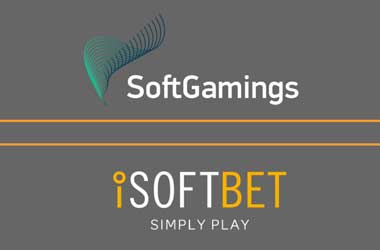 The time has come for another unison between companies, as SoftGamings went on to a sign a cooperation agreement uniting it with the iSoftBet provider yesterday. This unison between the two will see SoftGamings bring forth the collection of top-quality games from iSoftBet through its own gaming platform. Therefore, the SoftGamings platform just increased its game load by over 150 original titles from the iSoftBet developer.

This now gives online operators the chance to integrate the complete range of iSoftBet products, ranging between appealing video slots, through to table games, online video poker and more. And what’s more, they’ll be able to provide these for desktop players as well as mobile gamers. iSoftBet’s games were created and went through the development process so that they can launch within regulated markets as well. This includes the United Kingdom, Spain, Denmark, Portugal and Italy, amongst others.

iSoftBet is always proud to launch new games too, with two generally coming to light every month. Some of the developer’s most-popular offerings include Happy Birds, Shaolin Spin, Dolphin’s Island and Ninja Chef. It also has several branded games as well, including Paranormal Activity, so SoftGamings has greatly improved its portfolio of offerings.

More to Say on the Unison

Speaking of the partnership between the two companies, Michael Probert, working as Head of Business Development for iSoftBet said that it allows his company to provide games to a larger quantity of operators as well as their subsequent players. Furthermore, iSoftBet gets to establish itself on a higher level as one of the world’s most successful and popular developers today.

Backing up this reaction, Irina Sazonova, operating as SoftGamings’s Director of Partnerships said that her company has built its own formidable reputation throughout the online casino world. This, she said, has been due to the ability to provide them with easy access to some of the internet’s hottest games. The new partnership will ensure that SoftGamings can continue down such a fulfilling road.

It’s true to say that both of these companies have very much made a name for themselves within the world’s online casino sector. iSoftBet swiftly rose up the ranks and became a household name by quickly creating some of the world’s highest quality games, incorporating stunning visuals and themes. All of its games have been through HTML5 rendering, meaning that they’re easily available to mobile gamers as well as desktop players.

SoftGamings, on the other hand, operates as a B2B casino platforms provider. It boasts more than 10 years being in operation. The company creates its own solutions, including the addition of Bitcoin platforms, Turnkey, White Label, Live Bundles and more. It also works as a gaming systems aggregator, compiling titles from over 40 developers and thereby allowing access to more than 3,000 different games! Its live dealer options are on hand from well-known companies such as Netent, Ezugi and Evolution Gaming, while the range of slots come from such developers as Microgaming, Betsoft, Booming Games and Endorphina, to name but a few.