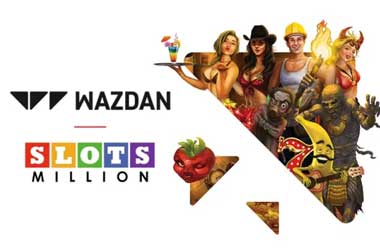 It looks as though the SlotsMillion platform is looking to reach that high amount of games as its name suggests. The platform recently went live with the collection of titles from the developer known as Wazdan. Providing a range of games, from slots to table games and video poker, Wazdan announced that it would partner up with ALEA – the operator of both SlotsMillion and sister flagship brand, LadyLucks.

It’s a fitting move, as SlotsMillion actually created its very first millionaire just a short time ago. One lucky winner hit a jackpot win of £2.2 million while playing the Mega Fortune game from Netent at the casino. This, along with the fact that the casino already provides players with over 2,000 different games to play, has seen SlotsMillion rise to the top as one of the industry’s leading brands. The site has also won various awards over the few years that it’s been in operation. These include accolades for Best Casino and Innovation Operator.

LadyLucks, on the other hand, is a very UK-focused mobile casino. This is one of the platform’s that ALEA became the owner of, acquiring it from the well-known IGT group in 2017. Both this platform and the aforementioned SlotsMillion will see themselves providing games from Wazdan to their players.

A Diverse Range of Games to Incorporate

The collection of games that is available from Wazdan includes some of the company’s most prestigious works. Therefore, at SlotsMillion you can expect to find options such as Magic Target Deluxe, Wild Guns, Great Book of Magic Deluxe and Valhalla all being available to play. These games, as well as about 100 others from Wazdan, are all available in HTML5 format, meaning that any mobile gamers at SlotsMillion will also be able to access them easily from a smartphone or tablet.

Speaking of the move to incorporate this new range of games, the co-founder of SlotsMillion Alexandre Tomic, mentioned that the site is “fully dedicated” when it comes to making sure players have an amazing experience. This keeps the platform working hard at creating new partnerships, such as the one formed with Wazdan, he said. Tomic went on to state that Wazdan has been very much the stand-out company for SlotsMillion, making its presence known at the forefront of video slots and the development of such over the past year or so.

Meanwhile, the sales manager of Wazdan, David Mann also gave his thoughts on the incorporation of his company’s games into the SlotsMillion collection. He said that Wazdan is delighted to be able to work with one of the industry’s “most progressive” as well as “player-focused” brands. He highlighted how platforms like SlotsMillion have been an important factor in attracting more players to the world of online gaming. The partnership, he said, now allows both Wazdan and SlotsMillion to build upon such growth.