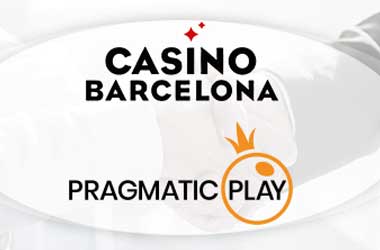 Players at the Casino Barcelona platform can expect to see the video slot catalogue expand there soon. It was announced just yesterday that the online gambling site has signed an agreement with popular developer Pragmatic Play. This will see the entire range of video slots from the developer be available to play at the casino.

Casino Barcelona exists as one of the few legally licensed online casinos within Spain. With the inclusion of the games from Pragmatic Play, the lobby is, without a doubt, going to dramatically increase in size. The developer has created over 100 slot games in the HTML5 format, meaning that they’ll be accessible via the desktop or mobile version of Casino Barcelona. Titles like the popular Wolf Gold will make their debut at the casino soon.

Speaking of the unison, the CCO of Pragmatic Play, Melissa Summerfield said that the brand is “delighted” to expand further into Spain. She said that the developer is “always looking to grow” when it comes to regulated markets.

Backing up those thoughts, Xavier Ballester – who operates as the Director at Casino Barcelona – said that Pragmatic Play is consistent with its production of intriguing content. He said that the developer’s games have been a proven hit in several other international locations. Therefore, he hopes that Casino Barcelona will also enjoy a “long and successful partnership” with the company.

The Pragmatic Play brand also recently took a step into the world of live dealer gaming, with the acquisition of the Extreme Live Gaming catalogue. This came from its sale via previous owner, Novomatic.

If you haven’t heard of Casino Barcelona before, then you may want to take a look at the platform. It’s one of the leading online casinos in Europe, leading the way in the country of Spain, naturally. The site has a variety of different games, with a large choice of slot machine options and several table games, like roulette and blackjack. Not only that, but avid poker players can also engage in their favourite activity, with the platform’s poker room being fully accessible.

As far as Pragmatic Play goes, this developer operates as one of the leaders in the industry of software. The brand provides innovation, strong themes, high-quality graphics and mobile-adaptable casino games. Its titles can be played in multiple different languages and currencies and can be found throughout the world in many different markets.

Players accessing Pragmatic’s games can be assured of having an exciting, thrilling time. Not only that, but the developer also has its hand in areas such as bingo and arcade casino games, making it a well-rounded, intriguing company.