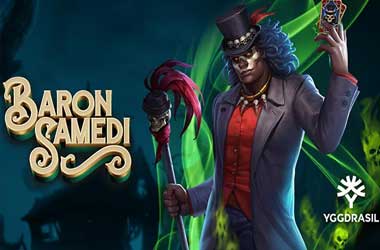 It wasn’t that long ago that Yggdrasil released the slot game Nitro Circus. However, it seems as though the developer doesn’t have any interest in slowing things down. The Scandinavian brand has taken it upon itself to launch another new game. This time it’s the game known as Baron Samedi, featuring a voodoo theme.

The game will debut at most online casinos later on in the month, but a small collection of platforms are already offering it exclusively to their players. Of course, being an Yggdrasil Gaming slot, there’s a lot to look forward to in the game for anyone who can already play it.

One of the platforms that has been granted early access to the game, is ComeOn Casino. Until the slot officially launches everywhere else, casinos such as ComeOn will offer it exclusively to their players for the proceeding days. So, if you’re a member of the casino, you can head over there now to gain access to the latest Yggdrasil slot release.

But what exactly can players expect from the slot?

Baron Samedi and All of His Voodoo Magic

The slot brings all the wonders and magic of voodoo to your screen, and, as is often the case with this developer, it features amazing, high-quality graphics. Basically, the story behind the game follows the titular character and his voodoo priestess known as Brijit. All of your gameplay in this one takes place across a five-reel setup, while 25 pay lines are present for you to place bets on.

Of course, the overall design and layout of the game is one thing, but Yggdrasil has also made sure to incorporate some intriguing specialities into the slot, too. A re-spin feature is present to begin with, and sticking with the theme of magic and mystery, three tarot cards will also be dealt out to all players. Not only that, but Baron Semedi features a freespins bonus round for you to play through.

The freespins round of the game provides you with 15 spins to begin with and on each of these, you’ll be dealt three tarot cards from the deck of 36. These cards can be used to be able to complete collections. Once a collection of cards is completed, you receive a group of rewards, which remain active for the remainder of the freespins round.

Some of the bonuses in the freespins bonus feature include mystery reel, super stacked wilds, multipliers and transforming symbols, to name but a few. You can even experience the wonder of a guaranteed five-of-a-kind win, thanks to the tarot cards.

So, if you’re ready to get your voodoo on and experience everything that this game provides, we’d suggest getting yourself over to ComeOn Casino. If you join the site today, you’ll also receive 20 freespins on Netent’s Starburst slot game.