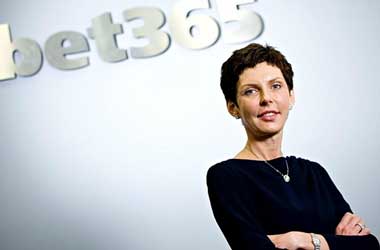 The Bet365 platform is one of the biggest and most popular in the United Kingdom. And its reach stretches farther afield than many other online platforms. Of course, holding such appeal and accepting players from so many locations can only mean that revenue is strong for the company. And never has this been more apparent than with the £217 million pay-out that the company CEO received last year!

Denise Coates noted “significant growth” as the primary reason that she received an annual income of £199 million. And on top of those earnings, she has also received a dividend of £18 million, raising her pay-out to the aforementioned £217 million. That makes her income more than 1,300 times the annual salary of British Prime Minister, Theresa May. It also pushes Coates to the top of the list of the highest paid executives in the country. The previous holder of this position was Sir Martin Sorrell of communications group WPP. And he earned £48 million in 2016/2017 – quite meagre in comparison to the revenue of Coates.

And while the Bet365 owner rakes in the big bucks, she also stated that £50 million of the platform’s income had been donated to charity. Known as the Denise Coates Foundation, “the organisation provides to grants charities dealing with issues such as health, education and medical research”, she said.

Keeping It in the Family

Denise began the mammoth gambling site back in 2000, working alongside her brother John. And even today, the Coates family retains a 93% stake in the online betting company. Denise is the majority shareholder at 50.1%. However, prior to her business venture with Bet365, Coates was a cashier at her father’s betting shops – Provincial Racing. She would go on to graduate with a first-class degree in econometrics from Sheffield University. At the age of 22, she took over the family business as manager and went on to expand it to almost 50 shops. Bet365 began from a temporary office in a Stoke car park, but has since become one of the biggest online gambling firms in the UK.

The previous accounting period saw Bet365 process more than £47 billion in bets. And that’s all thanks to a 27% percent increase in customer activity on the platform. Of course, the website provides gamblers with the opportunities to place bets on casino games, sports events and poker.

So, its diversity has also been a key factor in raising its profile and income. Naturally, Euro 2016 also ensured that the site’s annual growth rate increased. However, it was perhaps the 61% increase in mobile gaming that provided the biggest boost between 2016 and 2017. This combination ultimately led to a 15% rise in operating profits, bringing in £514 million.

Coates was awarded a CBE in 2012 and became known as one of the 100 most powerful women in the UK in 2013 Radio 4’s Woman’s Hour. And while Bet365’s base of operations is now on the island of Gibraltar, she became known as the “patron of the Potteries” for employing a significant number of people in Stoke.