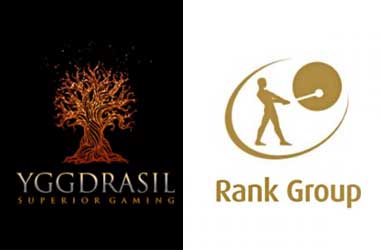 A deal has been made between Yggdrasil Gaming and Rank Group that will see the full collection of games from the former company further expand into the UK market. The deal will see the Grosvenor and Mecca casinos – both owned by Rank Group – receive a fresh injection of slot games into their portfolios. Titles coming from Yggdrasil will include Reef Run, Magic Mushroom and Holmes and the Stolen Stones.

Not only that, but the Rank Group will also get to experience Yggdrasil’s in-game promotional perks. This includes the option for them to BOOST and use the social media sharing tool, BRAG. These inclusions will assist Rank Group in promoting the games from the developer.

Speaking of the deal, the CEO of Yggdrasil, Fredrik Elmqvist noted that Rank Group exists as one of the most well-known game operators in the United Kingdom. Therefore, it works as another great addition for Yggdrasil Gaming to continue their expansion across this market. He also stated that he believes the company’s games will do well on the Grosvenor and Mecca casino platforms.

Head of Casino at Rank Group, Bhotesh Maheshwari spoke of Yggdrasil being a new entrant in the UK casino gaming space. However, he said that in this time the company has already delivered a set of “extraordinary titles” as well as “superior bonusing tools”. Maheshwari then went on to state that Rank Group is very pleased to offer the Yggdrasil content up to its Mecca and Grosvenor players.

The Rank Group claims to have over 2.8 million customers using its services at current, with over 10,000 employees in tow. It also plays host to 150 venues, which can be found scattered throughout the United Kingdom mainly. However, it also hosts a couple of casinos within Belgium and the Enracha casino in Spain. It has been providing gaming entertainment to the British public since 1937, and is well-known with the gambling industry.

The story of Yggdrasil is not quite as lengthy as Rank Group, with the developer starting out in 2013. It was at this time that the company received its first licence and it has only gone from strength-to-strength since then. It already provides its portfolio of games to a large number of online casinos, including popular platforms such as Leo Vegas and Casumo Casino.

Yggdrasil’s company headquarters are based in Malta, although this is not the only location that it operates from. Instead, it has a large development office working out of Krakow, Poland. Additionally, there are regional offices that can be found in Stockholm, Sweden and Gibraltar.

The company brings forth games that incorporate outstanding graphics and animations. This has become a large part of the provider’s signature appeal, as well as the previously spoken of inbuilt promotional tools. Earlier on in 2017, the company won the award for Innovator of the Year at the International Gaming Awards.