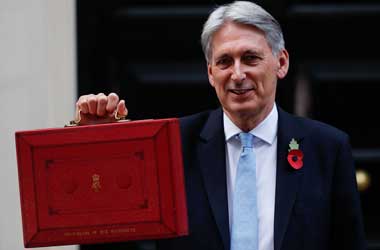 Online gambling operators in the United Kingdom have been targeted once again by the government. Following Monday’s Autumn Budget 2018 preview, increases in taxes for such operators were made clear.

The UK Chancellor, Philip Hammond spoke of this as being a way to offset the reduced maximum wagers on fixed odds betting terminals (FOBTs). The reduction from maximum bets of £100 to just £2 on these machines has already been delayed for several months, causing criticism from advocates against the terminals. Yet, the Chancellor reiterated that the sole reason for the tax hike is to cover the decrease in funds that the Government will receive from these terminals.

Originally, the cut in maximum stakes on FOBTs was supposed to come into effect in April 2019. This was then postponed to the same month in 2020 before being given a halfway point between the two of October 2019. Despite the fact that Hammond didn’t give away any details on the specific date of the stake cut, it’s likely it will occur at the same time as the increased RGD tax rate.

The RGD changes that make up part of the budget will come into effect next October. However, the percentage increase will not be quite as steep as what some were expecting, though.

Hammond stated that the Remote Gaming Duty (RGD) will simply see a rise from its current 15% up to 21%. The RGD operates as a tax that is applied to the revenue of online casinos. This is something completely different to the charge that online sportsbooks are required to pay.

Prior to the budget being released, speculation suggested that the RGD rate would increase up to around 25%. This saw the share prices of several major UK gambling firms go through a steep decline. However, the Chancellor’s budget speech was given too late on Monday for it to affect these prices in a positive way for that same day.

There has been a bit of a mixed bag of reactions within the casino industry itself, though. With the increased tax rate not being as high as potentially expected, a few have expressed their relief at it only going through a 6% rise. But it wasn’t all sighs of relief. Some operators have spoken negatively about the fact that this has been the third online tax increase taking place over the last four years.

Previously, the Government integrated a 15% point of consumption tax on online operators, while a tax on free bets was also brought into effect not so long ago. At the same time, land-based casinos have had to deal with a duty increase on their machines.

With the increase in the RGD tax, the Government expects to bring in £1.22 billion within the first five years of its operation. This should cover the loss of £1.15 billion from the reduction in maximum stakes on FOBTs, it says. The Chancellor’s budget also included an increase in tax on wine, champagne and cigarettes.