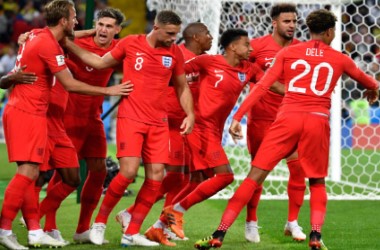 Things were teetering on the edge of a knife this past Tuesday, when England’s football team headed to penalty shoot outs against the South American team of Colombia. The tension and drama in the air was clearly visible, but England managed to come out on top, securing another win. With such enthralling football being played, the UK’s sports betting operators have been having a field day with enthusiastic bettors enjoying placing bets on the World Cup matches. And now the head of Ladbrokes’ racing PR has gone on to predict another bumper weekend of sports betting.

Not only will there be a mass of people placing their wagers on the England versus Sweden football event, but there’s also wagering taking place on Wimbledon, the Coral Eclipse Stakes and the British Grand Prix.
Speaking of the upcoming sporting events, Nicola McGeady spoke on July 5, stating that there could be a huge surge of £200 million placed in sports bets across the industry. This could provide what she referred to as “record turnover”.

These predictions coming from Ladbrokes are quite in line with the forecasts that were made ahead of the FIFA World Cup starting. Prior to the 2018 event kicking off, Alan Alger of Betway spoke to The Telegraph of the UK, rightly pointing out that betting firms in the country would be on track for a very lucrative summer period.

Back in 2014, while the previous World Cup was in play, bettors went on to wager a huge amount. Some even believe that the figures could have reached $2.4 billion in total, which is the same amount that FIFA would earn from its international television rights at the time.

To be able to get the most out of the summer sports events, many online sportsbooks have chosen to bring in special promotions that cater to avid bettors. Certain leading operators, such as Paddy Power, have been offering extras for their members, such as a string of cashback bonuses. Even the PokerStars platform launched a special offer providing a £100 million freeroll for all players that could correctly predict the outcome of all World Cup matches.

It’s perhaps a betting boost that online sportsbooks have been looking forward to. With the new opportunities coming to the US market after its ruling over the PASPA law, several experts have stated that it could buoy the industry. With the high level of avid sports bettors in the UK and the new US options, 2018 could definitely come out as being one of the industry’s most successful times by the end of the annual period. Obviously, the UK government has also taken the decision to reduce the maximum bets on Fixed Odds Betting Terminals (FOBTs), meaning that sports betting operators will likely want to make up any shortfalls in other ways. With such a bumper summer of events for gamblers to wager on, it’s likely that this will be covered and then some.