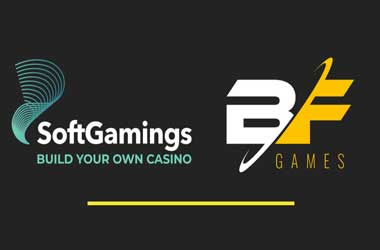 Following a distribution deal that was signed by both companies, SoftGamings is to incorporate the full range of online slot games from BF Games into its portfolio. The agreement will allow the former company to gain complete access to the BF Games collection of slot games, with over 50 of these being available.

Included within the collection of slots from BF Games is the brand’s most popular title – Book of Gods. This was only released in July, but it swiftly headed to the top of the company’s most popular titles. The slot, which takes on an Ancient Egyptian theme and utilises supreme graphics to display such, has five reels and three rows, whilst also incorporating 10 free spins, a wild symbol and a gamble mode, too.

Speaking of the decision to unite with SoftGamings, the head of business development at BF Games, Claudia Melcaru said that it will unlock various opportunities for the brand to extend its reach across some of the industry’s leading online casinos. She said that by adding the platform provider to its growing list of distribution partners, BF Games will continue to garner momentum. This comes “following a period of strong content performance” as well as plenty of business success for the brand.

The SoftGamings platform is also happy with the distribution deal that was signed between the two companies, said director of partnerships for the brand, Irina Sazonova. “We pride ourselves on working with the best developers in the industry”, she said, before mentioning that SoftGamings aims to continuously enhance its own platform. To do this, it needs to incorporate “new and exciting content”, which it will get by introducing products from BF Games into its portfolio.

She finished off by saying that due to the fact that BF Games brings “a diverse range of themes and innovative mechanics” within its slots, the company’s library will likely perform ideally on the SoftGamings platform.

The SoftGamings brand itself has been expanding in the industry itself, ever since it began operating back in 2007. At that time, it started out as a small reseller, but it didn’t take long for the company to grow into a large business, employing over 60 people and providing a wide range of services for the online gaming industry. SoftGamings already provides products from some of the world’s best developers, including popular brands like Netent, Betsoft, Evolution Gaming and Microgaming, amongst others.

BF Games, on the other hand, has gone through a rapid expansion within the past 12 months. This has seen the company’s portfolio of games increase in number significantly. Not only that, but BF holds certificates from the jurisdictions of the United Kingdom, Malta and Latvia already, and the developer aims to release more high-quality slot games in the upcoming months for those locations and more. The new releases will also be supplied via the SoftGamings platform as well.