Partnership Between Wazdan and Jumpman is Signed

Partnership Between Wazdan and Jumpman is Signed

Partnership Between Wazdan and Jumpman is Signed Jack Jakob
March 21, 2018 by Jack Jakob 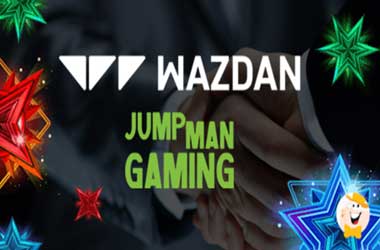 The software developer known as Wazdan has significantly strengthened its position in the UK market recently, by signing a partnership deal with Jumpman Gaming. The software company, which produces a wide range of table games, video poker and slots, announced its unison with Jumpman, enabling it to delve deeper into the UK gambling sector.

This comes fairly swiftly after Wazdan announced its reception of a UK gambling licence during the ICE Totally Gaming event in February. Now, with the new partnership, Jumpman Gaming will receive the complete collection of Wazdan games – a setup that contains more than 100 HTML5 slot games for the operator to provide.

Speaking of Jumpman, this company is the owner and operator of more than 80 online casino and bingo websites directed at the UK market. It also holds a gambling licence from the UK Gambling Commission, as well as a second one from the Alderney Gambling Control Commission. A lot of people are able to recognise a Jumpman Gaming platform from the very first moment they load up such. This is due to the norm of them providing intriguing special promotions, a diverse choice of games and additional features that many other operators do not provide.

What Will Jumpman Receive from Wazdan?

As part of the partnership, Jumpman Gaming is set to receive access to Wazdan’s entire game collection. This includes such titles as Burning Stars, Charlie the Cat, Black Horse, Jackpot Builders, In the Forest, Wild Girls, Triple Star and Night Club 81. More recently, Wazdan has launched such games as Dracula’s Castle, Fruit Fiesta, Magic Fruits 4 Deluxe and Tetri Mania Deluxe. All of these games are powered by the developer’s unique suite of tools, bringing extra value to players who access them.

Speaking of being able to access the Wazdan games, because of them being created in HTML5 format, they are playable from desktop computers, but also from smartphones and tablets. Therefore, anyone who accesses a Jumpman Gaming platform from a mobile device will be catered to with these games too. Some of the additional benefits of Wazdan’s games include the ability to access a unique Gamble Feature, turn on Energy Saving mode and utilise Double Screen mode.

The brand and marketing manager of Wazdan, Jeremy Fall spoke of the unison recently. He said that Wazdan wants to partner up with the best before marking the developer as one of the most innovative in the industry. Fall went on to speak of being delighted at signing a deal with Jumpman Gaming, stating that some of his company’s slots have features that no other provider supplies.

“Our games are outstanding entertainment…”, he continued, believing that the titles will be popular in the UK market.

His thoughts were almost echoed by sales manager, David Mann who said that Jumpman Gaming has earned itself an “excellent reputation” as far as the network of slot games that it provides goes. He said that Wazdan loves the value that the operator provides to its players and Wazdan is delighted to develop the UK market even more.