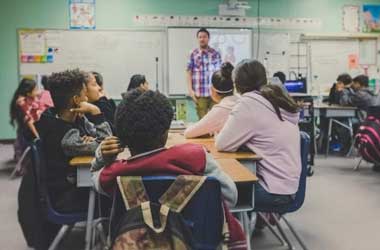 Various secondary schools around the United Kingdom have seen students receive education on the risks of gambling. In an attempt to target and pre-warn over the high levels of gambling amongst school-age children, multiple pupils were given details on how dangerous such activities can be. Recent figures have shown that about 25,000 children within the UK can be considered as problem gamblers.

However, despite these findings, the company known as Demos – a cross-party thinktank – information and education about gambling is not something that is frequently included in school curriculums. This is also despite the fact that such often teach about the dangers of other activities, like alcohol, sex and drugs. Now, in an effort to cover the lack of education on the matter, Demos has gone forth with its lessons on gambling and how to seek out help for addiction. The aim of these lessons is to ensure pupils think about the risk of gambling and identify certain manipulative behaviours from gambling operators. Furthermore, it aims to assist with students managing their own gambling impulses.

The Demos pilot saw four lessons taught in schools across the United Kingdom, giving about 650 pupils the necessary educative information. From these students – who were aged between 11 and 15 – a total of 41% stated that they have participated in gambling over the past year. The most common activity of these was placing money bets at 21%, with fruit machine interaction at 17% – both of which can also be done in online casinos.

Demos Reaction and the Way Forward

A social policy researcher at Demos, Simone Vibert provided details on the company move. She said that it’s somewhat of an anomaly that so many young people are routinely given information about the risks of other dangerous activity, but gambling is not one of them. “Problem gambling can wreak havoc on people’s lives…”, she went on, and then stated that prevention is obviously preferable to receiving treatment further down the road.

Following a 12-month trial period, the company recorded a strong decline in numbers of pupils playing cards for money. Furthermore, it noted a big increase in the number of pupils who were able to describe the routes to go in helping people experiencing gambling addiction. Due to these strong revelations, Demos is now trying to urge the UK government to incorporate lessons about the dangers of gambling participation as part of the Personal, Social, Health and Economic (PSHE) education. This is something that is currently under review by the government.

The findings and subsequent call to action of the government was backed up by the GambleAware organisation. The Director of Education there, Dr Jane Rigbye said that there are actually legitimate concerns relating to the advertisement of gambling when it comes to children. Not only that, but the more normal it is made for them to see both it and people participating in such, won’t alert them to the risks involved. Rigbye went on to state that GambleAware is pleased to have been a funder of the Demos project due to this.